Over the years, increasingly more pubs and breweries have adopted the newly developed bag-in-tank beer system. Why? Because of its numerous advantages, like better tasting beer, easier distribution and decreased costs. But what is the bag-in-tank beer principle? And how do you find out if it could be of value in your situation? On this page, you’ll learn all you need to know about the tank beer principle.

What is the bag-in-tank beer principle?

The bag-in-tank beer principle is based on a unique concept where the beer is stored in airtight bags in pressurised tanks. The system was originally developed for the distribution of pilsner beer produced by the major Dutch brands, and is stored in chilled cellars under pubs and bars. Over the years, however, the concept has been developed by Duotank and can now be used in a wide variety of applications.

The advantages of the tank beer concept have led it to being increasingly adopted by microbreweries and brewpubs. This popularity is partly due to the fact that the beer retains its flavour longer after being connected to the beer taps, (many major breweries guarantee up to 12 weeks!), making it ideal for the specialty beers that often have somewhat lower turnover. This is because no extra CO2 needs to be added to the beer, and the beer is kept at a constant temperature and pressure; these factors significantly help preserve the quality of the beer and increase customers’ enjoyment of the flavour.

Serving brewery-fresh beer in any pub

Beer should be drunk as the brewmaster has intended it: brewery-fresh. But how can you serve brewery-fresh beer outside of the brewery?

If you want to serve draught beer in a bar, there are several options regarding the packaging and the draught beer equipment. To find out if bag-in-tank beer could be a valuable solution for your company, we’ve compared tank beer to the most commonly used solution out there: keg beer. 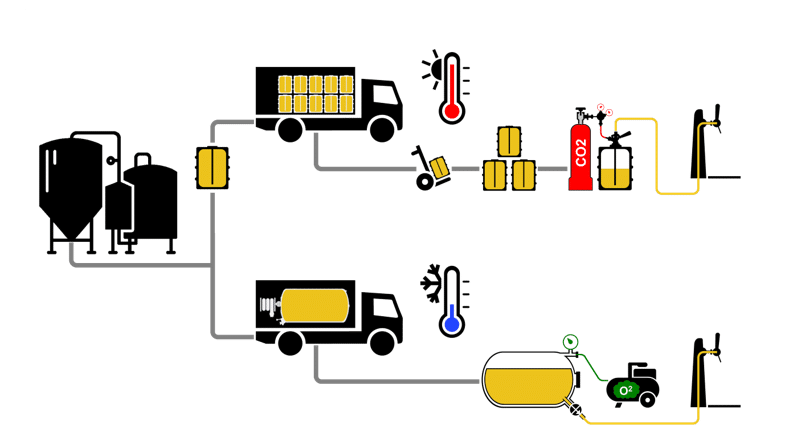 A keg cooler (or kegerator) is the simplest way to have draught beer in a bar. But besides the advantages, there are also a number of disadvantages you should take into account when opting for keg beer.

The tank beer system has been developed with optimization and cost-efficiency in mind. For that reason, it offers its users a number of advantages.

The primary application of the Bag-In-Tank system is for the storage, transport and distribution of beer. This might be transport from the brewery to the bottling plant, or even directly to the bar or pub, where beer can be drawn directly from the tank.

No one better than Duotank Beverage Solutions understands the importance of the quality of beer provision during events. Whether it concerns a concert, festival or sporting event, the provision of (soft) drinks is important for the visitors.

Is tank beer the right solution for your company?

Do the benefits of tank beer (better-preserved beer quality, increased shelf life, lower CO2 levels, and a better overall experience) have you wonder if it could be of value to your company? To know if the benefits truly outweigh the initial investment, you would have to calculate the numbers for your specific situation. Luckily, you do not have to do that alone.

Do you want to know more about tank beer or Duotank? Contact us

Our Duotank Experts have extensive experience in evaluating different draught beer solutions. Based on your specific situation, they can determine if the bag-in-tank principle can be of sufficient value to your company or if it’s better to choose a different solution.